Update Required To play the media you will need to either update your browser to a recent version or update your Flash plugin.

Update Required To play the media you will need to either update your browser to a recent version or update your Flash plugin. 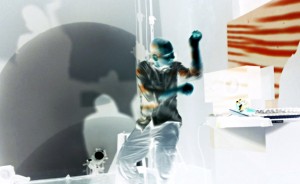 Ohad Fishof is an interdisciplinary artist, working in a diverse range of fields including dance, sound, performance, video and installation. He began his artistic career as lead singer and writer with the pioneering Israeli art-pop band Nosei Hamigbaat. He later moved to compose music for dance, performance and art installations while at the same time, expanding his artistic endeavors to other media. In 1997 he received an MA in Dance from Laban Center London. He spent the following years creating dance and performance pieces as well as sound and video installations in London, where he was then based. Home, His performance collaboration with artist Uri Katzenstein, was presented as part of the 2001 Venice Biennial.   Over the last twenty years, Fishof has been consistently expanding his ever-growing body of work – a difficult-to-categorize continuum of idiosyncratic time-based art, ranging from live music to site-specific performance work, video, installations and dance pieces.   In 2005 he performed in London A Slow Walk for Longplayer, a performance work commissioned by Artangel. In 2006 he created the multimedia piece SU in Tokyo, in collaboration with Japanese artist Uzo Ishiyama. In 2007 he formed Bney Hama with fellow musician Ishai Adar - an electronic avant-pop duo in which he played circuit bent instruments and sang. His installation and performance project Memo was one of the highlights of Art TLV 2008, Tel-Aviv's first Art biennial. In the same year Fishof was named Chosen Artist of the Israel Cultural Excellence Foundation. In 2010 he presented the installation The Sauna at The Petach-Tikva Museum and was granted a visiting artist residency at the Department of Dance in Ohio State University (he returned to OSU for additional residentcy periods). His short film Abduction won first prize for Best Experimental Film at the Jerusalem Film Festival 2011. In 2012 he premiered the audio-visual solo performance A Lecture on Architecture and performed it in Israel, Japan and The USA; And won the Ministry of Culture Award. In 2013 he presented The  Duck, a light, text and sound installation in Ashdod museum; Slow Walk Rothschild, a short film documenting a performance piece created during the social uprise in Israel in 2011; And the short film, Nothing.   During  those years, Fishof began making work in collaboration with his life partner, choreographer and dancer Noa Zuk. Their first work together, the dance video One More Song, was presented in many exhibitions and screenings worldwide. They went on to create numerous works for the screen and for the stage: The Nothing trilogy, presented in The U.S.A, Russia, Canada and Israel; An Old Woman Picking up a Stone From The Ground and Carrying it Back to Her House for Fronteir Danceland (Singapore); The quartet Garden of Minutes, premiered as part of Curtain’s Up Festival in Tel Aviv; And the Video work ADR.   In 2016 the two created The Burnt Room. The piece was commissioned by n.b.k Berlin and The Center for Contemporary Art in Tel Aviv and toured Israel, Germany, Italy and Scotland, where it was performed as part of BBC Scottish symphony Orchestra’s Tectonics Festival. In 2017 Zuk & Fishof created 3 Traditional Dances, commissioned by Baerum Kulturhus in Sandvika, Norway. Their most recent Work, Shutdown, was commissioned and premiered by Germany’s Wee Dance Company.   Fishof’s solo performance evening, a double bill that included his performance work HD, was premiered as part of Print Screen New Media Festival in 2014 and later presented as part of Batsheva Dance Company Hosts season as well as in the Tel Aviv Museum. Fishof’s Most  Recent full evening solo performance work, The Talking stick is Learning Hebrew, was premiered in 2018 (Print Screen Festival). His recent music collaborations include his improvisation duo with conductor and musician Ilan Volkov. "Album 1", A Solo album of his music, was released in 2019 by Antwerp’s Entr’acte Records.   Fishof is a long-term collaborator of Batsheva Dance Company and its artistic director Ohad Naharin. He designed the soundtracks for Naharin’s Three, Max, Seder, Furo and Telophaza, and served as a dramaturge for the latter, as well as for Naharin's solo evening Playback, where he acted as musical director. Fishof is also a senior teacher of Naharin's Gaga movement language, and had taught Gaga classes and workshops worldwide.   Fishof lives and works in Tel Aviv. He teaches at Bezalel Academy of Art and Design and and at Hamidrasha Faculty for the Arts in Beit Berl College.